Go! Go! Hypergrind is a skateboarding video game developed by Team POPONCHI and published by Atlus USA. Art design and other work for the game was done by Spümcø. The game was released in 2003 as a GameCube exclusive, and only in North America.

Though not common knowledge, animation studios in the "Real World" have access to a place called the "Toon World", inhabited by cartoon characters. In the Toon World, animated cartoons are filmed and produced after the scripts and storyboards have been provided by studios in the Real World. However, with computer-generated imagery on the rise, the Toon World is starting to lose work. In a plan to revitalize their struggling economy, the Toon World turned to Spümcø studios to help produce an action skateboarding cartoon called "Hypergrind". A skateboard training center is established in the Toon World, and auditions for the lead role of Hypergrind begin promptly. This is where the story begins. In the game's Story Mode, you (the player) choose one of the cartoon-star hopefuls and skate your heart out for the chance to be the star of the upcoming cartoon.

Go! Go! Hypergrind is comparable to other skateboarding games of its time, allowing the player to perform a sizable list of skateboarding tricks and maneuvers (referred to by the game as "Appeals"), such as grinds, manuals, and the like. However, what really sets Go! Go! Hypergrind apart is the game's "Negative Reaction" system. The game's stages are riddled with hazards, and successfully interacting with said hazards will cause your character to enter a Negative Reaction state for a limited time. There are several Negative Reaction states, each being a slapstick manner of deforming your character. Reactions include being set on fire, flattened, covered in "paint", or decapitated. Entering a Negative Reaction state can be used to chain into other Reactions, extend Appeal combos, or even interact with obstacles or hazards in a way you could not normally. Each character also has their own short list of unique tricks (called "Special Appeals") that can only be performed while not in a Negative Reaction state.

In Story Mode, you select a character and try to out-skate the competition to claim the lead role in Spümcø’s new, upcoming cartoon. There are three difficulties to Story Mode: Normal, Hard, and Expert. Each difficulty is much more difficult than the last, with Expert being nearly impossible to beat.

Story Mode progresses through each of the game's 8 stages in a series of 8 "Acts". Each Act consists of multiple rounds, in which you compete against other characters in "Rank Matches". Your performance in each round determines your rank, and you are rewarded points accordingly in a leaderboard-style fashion. The character with the highest ranking (most points) at the end of all 8 Acts is announced the star of Hypergrind. Performance in rounds will also net you currency that can be spent between rounds in exchange for board customization options and gear to augment your character's base stats.

The objective of each Rank Match alternates among the following:

Appeal Champ: The player with the higher appeal score when the round is over wins.

Race: Collect 3 different colored coins and reach the goal before your opponent does.

Simon Says: Complete as many Negative Reactions as possible in the order indicated before time runs out.

Link Appeal: Score as many points as possible for a single Appeal Link.

Battle: Reduce your opponent’s life bar to nothing to win.

Mini Game: Goals will vary depending on the stage and if the stage in question has mini game as its last task.

Single Session: Participate in a 2-minute skate session to rack up a killer score. Set records and earn collectable pictures for the game's Collection.

Free Ride: Practice without having to worry about a time limit or score.

In this mode, you can play against a friend or the CPU in one of the following games:

Appeal Champ: The player with the higher Appeal score when time runs out is the winner.

Simon Says: The player who performs the most Negative Reactions as indicated wins.

Push: To win, perform Appeals to squeeze your opponent off the screen.

Battle: The player who reduces their opponent’s life bar to nothing wins!

Race: Collect 3 different colored coins and reach the goal before your opponent does.

There are 8 different stages in Go! Go! Hypergrind. The game's stages are film sets that are thematically unique and differ in size from one another. Each stage has at least one special event you can trigger to somewhat alter the stage or add new hazards to interact with. These are the 8 available stages:

There are 6 different stats that apply to each character. A character's base stats have predefined values that range from 1 to 10 and can be raised or lowered by equipping gear. The 6 stats are as follows:

There are a total of 297 collectables in the game, categorized into 1 of 5 "Collections". Each collectable is earned through Story Mode or the Single Session mode. These are the 5 Collections: 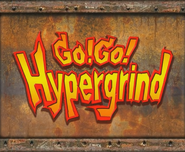 The title as seen at the end of the game's opening 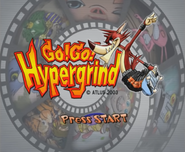 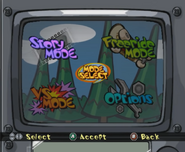 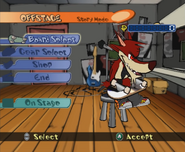 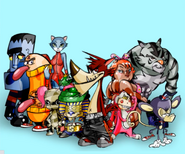 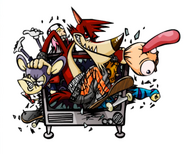